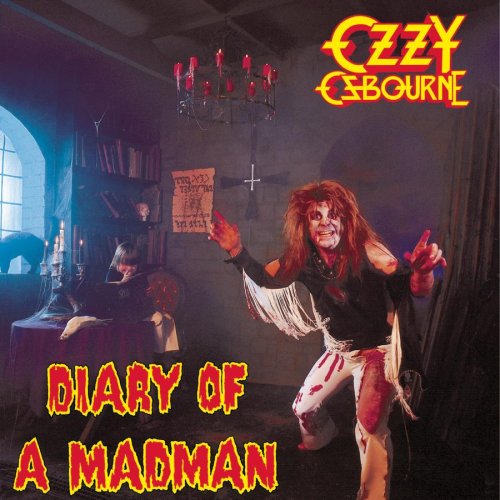 
For all those connoisseurs of the heavier things in life, I present you “Diary of a Madman”. Another land mark release from the Ozz. One thing that can be said of Ozzy, he always has surrounded himself with the best musicians and six stringers over the years, and the original cut of this album has the best- Randy Rhodes, Bob Daisley, and Lee Kerslake, with a great keyboardist, Johnny Cook, who ultimately didn’t receive credits on the original. Ozzy was funny that way, not giving the credits to his musicians, and I feel this is his biggest musical business flaw.

The tracks for this album were made at the same time as “Blizzard of Ozz”. Some would say the best tracks went on “Blizzard”, but I disagree. “Diary of a Madman” has a great production, a production that was a bit more polished than “Blizzard”, and the songs are very consistent throughout the whole album. The consistency in this album is Randy, Bob, and Lee and these three musicians will always be linked to Ozzy, whether he likes it or not. “Diary of a Madman” has its flaws, like the vocals appearing to be ‘placed’ on the songs, and the lyrics are seemingly generic at times. Don’t misunderstand me here, Ozzy is very coherent and has no filler in his vocals, and uses his vocal talents to the utmost in this album. What catches my attention the most on “Diary of a Madman” is the fact that this album doesn’t contain the catchy mainstream singles that “Blizzard” had. "Diary of a Madman" has a musical flow to the songs, there doesn't appear to be any chops between songs or like any of the songs are out of place. This to me makes “Diary” the better of the two albums. This album definitely sealed Ozzy’s influence in metal history, laying down the tracks that would bind heavy metal and hard rock together forever. The band made perfect pace transitions between hard rock and metal, and made the transitions seamless, and that is metal history! 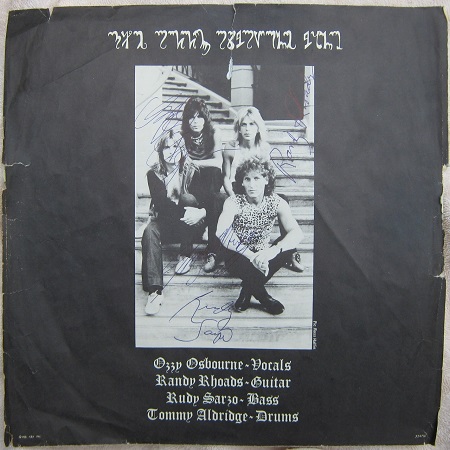 No review is complete without mentions of the ghastly business decision to remix and release this album (and Blizzard of Ozz) in 2002 with the sole purpose to remove the Bass and Drum tracks by Bob Daisley and Lee Kerslake. This was a retaliatory move because Daisley and Kerslake had successfully won song writing credits in court. These credits were not given to Daisley and Kerslake on the original release. Those tracks were replaced in 2002 with tracks by Robert Trujillo (bass) and Mike Borden (drums). Shame, Shame!!! 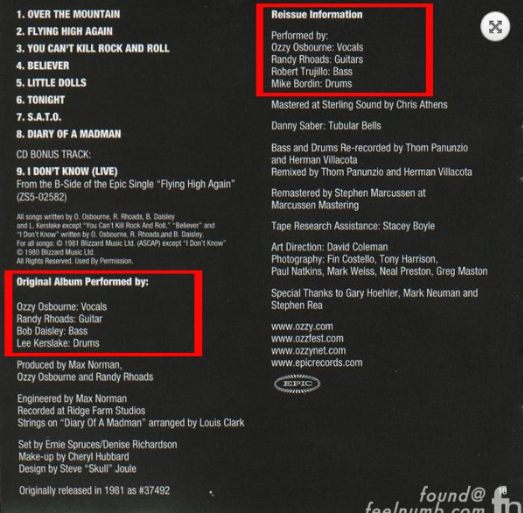 Great review Miss Magic!, I'm always back and forth about which album I like better, Blizzard or Mad Man. I guess it depends on my mood at the time because the two are different but equal. They should've given credit to the keyboardist (Johnny Cook) I think all musicians that play on an album deserve credit. They should've given the proper song writing credit to Daisley and Kerslake as well, it could have avoided a lot of bitterness and lawsuits.

I like both albums, but will always revert to Blizzard as my favorite of the two. Good points all over in the review.

I was not aware that these songs were recorded at the same time as Blizzard. That seems odd to me as a few of the songs have a really weak sounding production compared to Blizzard, specifically Over the Mountain and Flying High Again. Not to say they are bad, but they sound kind of 'empty' compared to everything on Blizzard.

As for those abortions known as the "remasters", Ozz and Sharon should be publicly flogged for what they did there. I don't care whose idea it was, I don't care what shitty and shifty reason they used to justify it. It is bullshit and those re-recordings are awful because of it. It often gets ignored, but Bark at the Moon suffered the same fate as the first two albums. Unfortunately, they didn't properly re-fix (un-"Fix") that mess like they did with the first two in another Osbourne money-grab. All of those shit re-recordings are also littered all over the Ozzy box set (Prince of Darkness) as well as "Essential Ozzy".
Last edited: Aug 28, 2018