I put this in the metal section, but feel free to pick non-metal albums as well.

I'm gonna have to review everything that I've heard this year that actually came out this year and make a determination. Honestly, I'd probably put Kamelot's The Shadow Theory at the top of my list right now. That's an excellent album. Amorphis's Queen of Time is probably in my top five. Thrice's Palms is top five as well, and I think Omnium Gatherum's The Burning Cold is too - I'll have to go back and listen to that one again. Within Temptation's upcoming album Resist might just sneak away with the title when all is said and done, but we'll see.

I've heard a lot of good stuff this year that didn't actually come out this year. After Forever's final, self-titled album is so good. Heilung's Lifa and Eivør's Slør are two of the most amazing, unique sounding albums I've ever heard in my life. Overall, Slør is probably my favorite thing that I've heard this year, so far, anyway.

A lot of good stuff came out this year. Judas Priest "Firepower" (which I know will be topping a lot of lists online) Orange Goblin "The Wolf Bites Back" was good. Leaves Eyes "Sign of the Dragon Head" was another decent album (considering it is a new vocalist)

Magic said:
I am going to go over my stuff from 2018, too. At the moment, I will probably hold Ghost "Prequelle" at #1 with Kamelot "The Shadow Theory" at #2.

A lot of good stuff came out this year. Judas Priest "Firepower" (which I know will be topping a lot of lists online) Orange Goblin "The Wolf Bites Back" was good. Leaves Eyes "Sign of the Dragon Head" was another decent album (considering it is a new vocalist)
Click to expand...
I totally forgot about the Leaves' Eyes album! I don't even know if I've listened to that one all the way through, but every time I put it on in the car, I tend to leave it on for the duration of the drive. I also forgot to mention Amaranthe's Helix, which I frequently listen to in the car, and Primordial's Exile Amongst the Ruins, which I listened to again last night. Those are absolutely Album of the Year contenders for me.

This extended holiday weekend is the perfect opportunity to listen to the surprisingly low number of albums that came out this year that I purchased. I don't even know if there are ten of them. Most of the stuff I bought this year is stuff from previous years.

So, here's my list of albums released in 2018 that I've purchased and are therefore in the running. It's actually longer than I thought.

Some are obviously more likely to win than others, but I'm going to keep an open mind. Looks like I've got some work to do!

Okay, I'm not all the way through the list yet, but I can now project that with 8 of the 12 albums remaining to be listened to, Heilung's Lifa, which was indeed released in 2018, though they were performing live shows for it back in 2017, will be my Album of the Year for 2018. 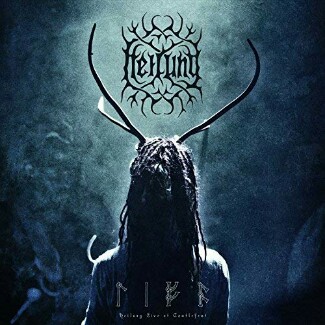 This was actually a pretty close competition until I decided to listen to Lifa again yesterday. I feel the need to emphasize that most of the other albums on my list are very good albums that I think are worth your time. I actually don't think I regret buying any of them, which doesn't happen very often. I'll run through a few of them:

The biggest surprise here for me was definitely Sign of the Dragonhead. It's enjoyable from start to finish and provided a perfectly fitting musical backdrop for my 40+ minute highway drive back from my aunt's house on Thanksgiving night. The rumors of the demise of Leaves' Eyes after beloved fan favorite Liv Kristine's sudden, unceremonious departure and the totally adorable Elina Siirala's arrival were greatly exaggerated.

Exile Amongst the Ruins is possibly Primordial's best work yet, performed with all of the passion and conviction that I've come to expect from them. Stolen Years is easily one of the best songs they've ever made. To Hell or the Hangman was a bit of a lyrical departure/experiment for them since it tells a historical tale of unrequited love, but they pulled it off quite well.

The Shadow Theory, which is essentially Haven part 2, is also Kamelot's best album to date in my opinion. Bringing in Lauren Hart from Once Human to showcase her lovely clean and ferocious growled vocals on Phantom Divine was an excellent decision, and her presence on MindFall Remedy was a pleasant surprise later in the album. I liked her vocals so much that I ended up buying Once Human's Evolution, a solid album that came out last year.

Helix starts out better than any previous Amaranthe album. The opener, The Score, is the perfect track to start out my car ride to and from work with, and that positive, pumped up feeling continues through 365 onwards. Sadly, the album starts to fall off a bit right after the halfway mark, beginning with the song GG6. It's still a very solid outing for them overall, though, on par with their previous records.

As I said, pretty much all of the aforementioned albums on my list are very good albums that I enjoy listening to. Heilung's Lifa, however, isn't just an album for me. It's an experience. It's not a rock or metal album. It's much more in the realm of traditional folk music, or "amplified history," as Heilung calls it. When I sit down and listen to Lifa, it just takes me to another place. The atmosphere/ambience is excellent. It's a live album, which I don't normally like, but the occasional cheers and shouts from the crowd aren't off-putting as they normally are for me. On the contrary, they make me feel like I'm right there, sitting in the audience, watching and listening to what sounds like an ancient ritual of sorts.

Musically, there are a lot of layers to the cake. Vocals come in the forms of harsh male growls, soothing female singing, shamanic-style chanting, shouting, and spoken word. Instrumentation comes in the form of rhythmic drumming, animal bones, ancient horns and bells, and much more.

The mere thought that a group could come along in 2018 doing shamanic chants and playing animal bones as instruments and somehow create my Album of the Year is just insane, but yes, Heilung has done exactly that. Everything about this album is, quite frankly, superb. I highly recommend checking it out if any of you haven't done so, regardless of what genre/subgenre of music you're into.

If you have about an hour and 15 minutes to spare, here's the full show, from start to finish.