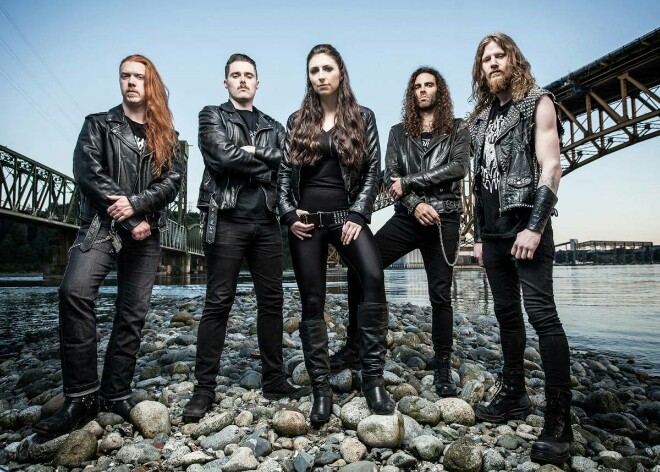 Current members:
Albums:
Unleash The Archers is a Canadian power metal band formed in 2007. I've known about them for a while now but really got into them after hearing their album Apex, which was my favorite album from 2017. I love Brittney Slayes and her powerful, soaring clean vocals. She sounds like a traditional power metal vocalist in that regard, which makes her somewhat of a unicorn since there isn't an overabundance of females who are currently doing that vocal style.

Overall, sound-wise, they're a modern traditional/power metal band with a bit of a melodic metalcore vibe interspersed throughout. I own two of their albums, Apex and Time Stands Still, both of which they made once they signed with Napalm Records, which is probably my favorite metal record label. Apex really snuck up on me. I took a chance on it, thinking I would get bored with it fairly quickly, as had typically been the case in the past for me with power metal records. I was very, very wrong. Every single song on that album is good.


The Matriarch (from Apex)


Cleanse the Bloodlines (from Apex)


Apex (title track from that album)

A coworker of mine suggested that I check these guys out. I've heard a couple of songs, but not recently. I need to give some of their stuff a listen

Lynch said:
A coworker of mine suggested that I check these guys out. I've heard a couple of songs, but not recently. I need to give some of their stuff a listen
Click to expand...
I was the same way with them. I had to listen to some of their songs a few times on YouTube before I finally took the plunge and bought Apex. If you like power metal at all, even just a little, give them a chance. I doubt you'll be disappointed.
Last edited: Jul 29, 2018

I cleaned up my OP a bit and added some info about the band. Their official website doesn't have much on it right now - just links to their online stores and social media pages.

I love Unleash the Archers. I actually got super excited for a second and thought that a new LP was coming. Even if it's just an EP, hearing new material from them is always exciting. Great song!

This is an excellent song. I can't wait for this album to come out!