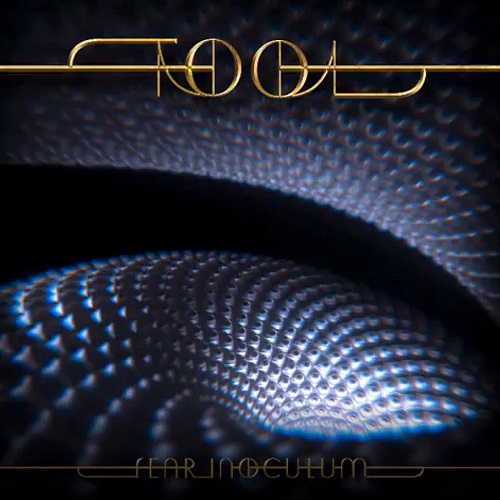 
This is Tool's fifth album with the digital version clocking in at a little over 86 minutes. This is the first time I have ever listened to any Tool album. I have heard songs here and there like "Schism", "Lateralus", and "Vicarious". This is their first album since 2006 and back in those days Tool just wasn't the type of band I would listen to. My music tastes have become very eclectic since then and I thought I would give Fear Inoculum a listen since it just came out a couple weeks ago......

According to Wikipedia, Tool released "Fear Inoculum" as a single on August 7, 2019, so I thought I would listen to the single first and decide if I wanted to continue listening to the album.


"Fear Inoculum" (the song) has a very slow build. The sound begins with a slow sinister soundscape and the vocals are soft which adds to the eerie feel. After a couple minutes the pace builds and you hear some chanting vocals then you get a full wall of sound. This song has ever changing time signatures. The farther you get into the song, the more sound layers you hear and the vocals become deep and mysterious along with the music. The song title implies an injection of fear; I did not get a feeling of fear, but a disturbing aura.

"Pneuma", which means the vital spirit of a person, is exactly what the song is about....waking up the inner soul. This song is a highlight on the album. Great guitar riffs, outstanding bass, percussion heavy, great production, awesome lyrics, and the vocals are perfect. The music has elements of middle eastern influence and 60's psychedelics. I have read a lot of poor critical reviews of Keenan's voice but I don't find his voice to be annoying thus far, in fact quite the opposite. The short interlude that follows this song is totally weird....lol.

"Invicible". Adam Jones guitar work is outstanding and Chancellor's bass is easily heard. The song is a bit long and droning, I found myself losing interest at times, then the pace and tone of the song will pick up & change, almost as if there are several songs within one, and this was enough to keep my attention. The lyrical content is excellent; of old warriors struggling to be relevant. One thing I will give Keenan massive credit for is his ability to write excellent lyrics. The next short interlude is just as weird as the last and really doesn't seem necessary. From my understanding, if you get the physical CD, these short instrumental interludes are omitted...which is a good idea, IMO.

"Descending" is a song with a very slow build, adding layer upon layer of sound, moving in all directions, eventually arriving to some of the heaviest music on the album. The vocals are soft with a slight echo. The guitars are beautiful and quite memorable. The percussion sets the pace for the music and Carey never misses a beat. This song is my pick off the album.

"Culling Voices" is another good track. It gives the listener the soft and the heavy--at times it is very instrumentally heavy. It moves from a slow pace to a mid pace with ease. The vocals are soft and sweet, and I remember a chant of 'Don't you dare point that at me' when the music begins getting heavy. "Chocolate Chip Trip", a useless synth & percussion noodling, is very disruptive to the flow of the music and SHOULD have been omitted off the CD along with the other instrumental interludes.

"7empest" doesn't waste much time getting down to heavy business. It is full of guitar solos, bass solos, beat blasting drums, and the most gruff vocals on the album. This song has a very very long mid song jam session that gives way to more vocals, most of which are spoken chants of 'A tempest must be just that'. Then another short jam session which is a bit heavier than the first....which gives way to a slower repetitive musical tempo, and more vocals. 7empest wraps up with chants that leads to "Mockingbeat" which is a weird instrumental of animal sounds, which made me go WTF (in a laughing way)........

Overall, the album is decent. I like multifaceted prog with ambience, and that is exactly the summation I would give Fear Inoculum. However, I have to give bad scores for the instrumental garbage Tool saw fit to add to the digital and CD version. The album has a much better cohesion and flow if you skip that garbage. The musicianship is superlative. Fear Inoculum is masterfully produced.

I haven't listened to the entire album yet. I'm honestly a bit surprised that they released the whole thing track by track on their official YT page.

7empest is probably one of the better songs I've ever heard from them, although it gets a bit repetitive by the end of the nearly 16 minute song. Mockingbird and Legion Inoculant (to me) are perfect examples of pure and utter narcisism that can be found in some artist's music. While writing this, I decided to listen to the Chocolate Chip track, throw that into the mix. Non-sensical noise (IMHO) and it reminds me of a modern day, instrumental version of Revolution #9. Not a fan of this kind of stuff.

Pink Floyd could be accused of this on some of their earlier albums as well, but at least most of that felt like it belonged as part of the story/theme/mood. The instrumentals here feel more like "look what we can get away with" tripe.

Alright, I've listened to the entire album now, start to finish. There's really some good music in it. And, there's also some waste-of-space filler. The "Instrumentals" can go. To me, they don't fit. They don't even feel like proper filler. (I pretty much addressed this in the previous post).

Honestly speaking, I've never been a fan of the band. I didn't ever hate them, but it just wasn't my thing. Always thought that they were vastly overrated. Still do. HOWEVER I will say this. I would seriously consider buying this album, ripping it and throwing away the instrumentals. It's really too bad. Musically... the guys in the band sound great on the other songs. In my honest opinion, I think that the production quality on this album is very good. Vocals are ok-at-best, but the music would keep me listening.

First impression to me was a 2/5 at best because to me it felt like it was too repetitive and too little progression for how long each song is.

My first impression wasn't very good either. However, after I listened to the album a couple more times (as I always do before I write a review), and I left off all the instrumentals, the album is much more entertaining. I feel the album has a lot moments where Tool does a very good job of adding a progression of multifaceted layers , like "Fear Inoculum" and "Descending". I think Tool utilized some 60's & 70's style jam sessions quite a bit and those tend to be repetitive and boring. I am a fan of those long jams, "Green Grass and High Tides" (the long version) is one of my all time, all star, favorite songs.........and that is about as repetitive a song can get.

When I gave the score of 4/5....I felt it was a fair score. The musicianship, lyrics, vocals, and production are all top notch. At least they had the good sense to release a CD version without all that instrumental filler garbage..........