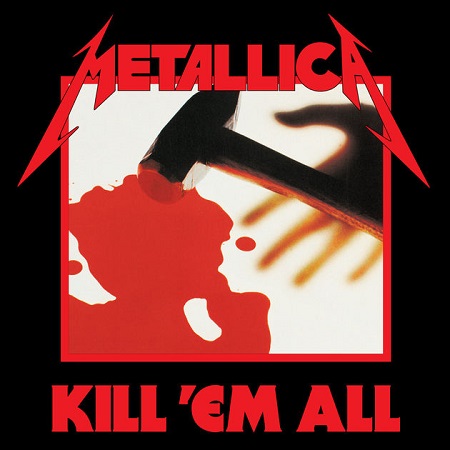 In 1983 when Kill 'Em All came out, the music charts were dominated by post punk bands Marillion, The Police, and Violent Femmes along with hair bands Def Leppard, Quiet Riot, and Motley Crue. Heavy metal bands like Judas Priest, Iron Maiden, and Black Sabbath were already well established......then came Metallica. Metallica was a totally new breed of metal. It was like nothing metal music fans had heard to date and Kill 'Em All was met with almost ZERO comments from critics. {{ I think the critics were afraid to say anything, then have their words shoved down their throats by this new band who the fans loved.}} The album's record label evidently had doubts it would be successful because they initially pressed 15,000 copies in July 1983 then pressed the album in batches of 500.....by the end of 1983, over 17,000 copies had sold in the USA and since then has gone 3 x platinum with over 3mil copies sold.

Kill 'Em All had all the speed and angst of punk rock and the riffage of heavy metal. Metallica exuded an image of power and had the stamina to keep that powerful show of adrenaline going through the whole album. Kill 'Em All is only just a foreshadow of how great Metallica would become and how much historical significance this album would have on future bands and the formation of a genre of heavy metal.

The opening song "Hit The Lights" first appeared on one of Metal Blade Records Metal Massacre Compilations in 1982. This recording was the only one to have the first carnation of "Mettallica" (yes it was spelled like that) with James Hetfield - Lead Vocals, Rhythm Guitar, Bass; Dave Mustaine - Lead Guitar, Backing Vocals; Lloyd Grant - Lead Guitar; Lars Ulrich - Drums, Percussion. Hit The Lights delivers a full on auricle assault!


"The Four Horsemen" is my pick off Kill 'Em All. James Hetfield's vocals are outstanding. The guitar solo's, IMO, are the most impressive on the whole album. This song is credited to Dave Mustaine, who they fired before this album was released.....

I'm going to skip over "Motorbreath" because I feel this track sounds musically immature, rushed, and incomplete.

"Jump In The Fire" has some of the most catchy guitar work on the whole album. My only complaint on this song, is it seems long and repetitive before you get to a killer solo. Another song creditied to Mustaine.......

"(Anesthesia) Pulling Teeth" ....Bass Solo, Take One! This was Cliff Burton's time to showcase his talents, nothing more. R.I.P Cliff!

"Whiplash" is an anthem to all the headbangers out there. This song slays you with ferocious speed. Very raw, but well done.

"Phantom Lord" is fast paced and ominous, then you get a cool down which is stunning and adds dimension to the song. The ending gives you a really sick scream from Hetfield!

"No Remorse" is a guitar driven song with a pretty good vocal delivery from Hetfield. Lyrically, this song is very powerful. It is about the killing in war.....Blood Feeds The War Machine, No Remorse Is the One Command.

"Seek & Destroy" has a great opening guitar riff, the best on the whole album. This would be my #2 pick off the album. Just a good all around song.

"Metal Melitia" is the fastest paced song on the album. This song has some awesome guitar work and nice bass work by Cliff. A fantastic ending to the album.

My overall rating and given the fact this album has a historical significance for creating a musical genre: 4.5/5