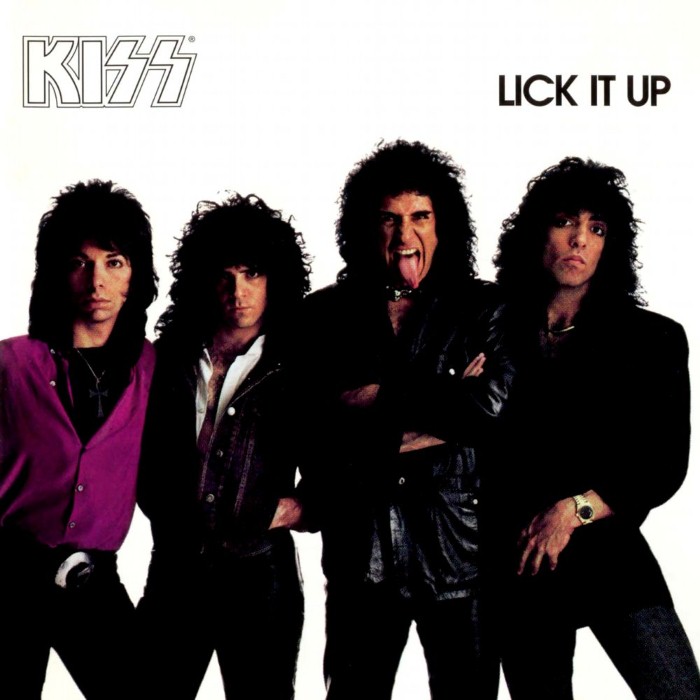 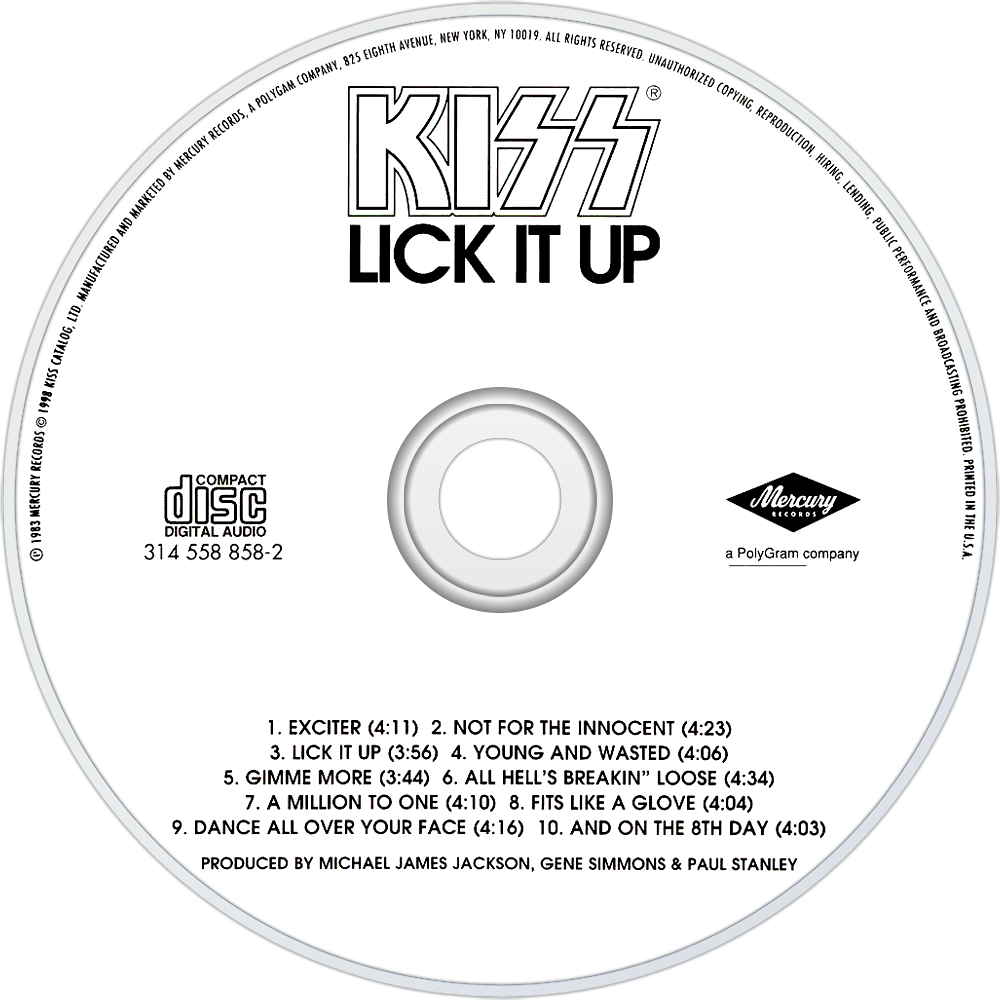 Overview:
Lick It Up is the 11th studio album by the American rock band Kiss. On the day of the album's release, Kiss appeared on MTV without their trademark makeup. It was the first public appearance without makeup by Kiss since the very early days of the band. The title track remains a regular staple in on the band's live performances, having been played over nine-hundred times as of September 2012, but the rest of the album is rarely played live.
Lick It Up built upon the harder sound Kiss had displayed on 1982's Creatures of the Night. But while Creatures of the Night was a commercial disappointment for Kiss, Lick It Up sold much better. It was certified gold on December 22, 1983, the first Kiss album to achieve certification since 1980's Unmasked. This is partially attributable to the increased publicity the band received after their unmasking.[citation needed]
"Lick It Up" and "All Hell's Breakin' Loose" were released as singles from the album. They were accompanied by a pair of similarly themed, tongue-in-cheek videos featuring the band (along with many scantily clad women) in desolate, post-apocalyptic settings. This is the first Kiss album that lead guitarist Vinnie Vincent officially contributed to. He unofficially contributed to Creatures of the Night. Also for the first time, Vincent appeared on the cover art for the album, whereas Ace Frehley had appeared on the Creatures of the Night cover, despite having already left the band and not being involved in the recording of the album.
Vincent was not legally a member of the band. Due partly to disputes over what his role in the band and his pay would be (some reports indicated that Vincent had asked for, and was flatly denied, a percentage of the band's gross profits), Vincent never signed any contract making his employment official. These disputes, along with a growing attitude by Vincent that he was solely responsible for the resurgence of Kiss, would lead to him leaving the band (or being fired, depending on the source) after the European leg of the Lick It Up tour.
With the band unable to secure a replacement guitarist on such short notice, Vincent was enticed to return for the American leg of the tour. However, his refusal to sign his contract continued to be a sore point. A major rift developed between Vincent and the rest of the band over his guitar solos. What were supposed 5-8 minute solos timed to finish on a cue so that Paul Stanley could introduce the next song, suddenly expanded in some instances leaving the rest of the band impatiently waiting on stage for Vincent to finish.
At an LA Forum show in January 1984 Vincent continued playing despite Stanley's cueing him to finish the solo. The two nearly came to blows in the dressing room afterward, with Stanley accusing Vincent of showing him up and Vincent accusing the other three members of ruining his solo and trying to hold him back as a performer. They were separated by Eric Carr and Gene Simmons and a couple of roadies who tried to keep the peace. At a March show in Quebec, Canada, as the band prepared to close out their set, Vincent broke into an impromptu solo, leaving the other band members standing onstage with nothing to do. Vincent left (or was fired for a second time, depending on the source) shortly after. This time the break was permanent.
Although according to Simmons and Stanley, Vinnie Vincent was never "officially" a member of the band, he appears on the cover and is credited in the liner notes as the band's lead guitarist. If Vinnie Vincent was officially the lead guitarist, Lick It Up would be to date one of two Kiss albums in which every song is credited to only band members with no outside writers or no cover songs, the other being 2009's Sonic Boom.
"All Hell's Breakin' Loose" is one of three songs in the history of the band in which all four (current at the time) members share song-writing credit, the others being "Love Theme From Kiss" and "Back To The Stone Age". In an interview for KISSology 2, Paul Stanley made the statement that, "People were now listening with their eyes rather than their ears. Mainly, because Creatures of the Night was arguably a better album than Lick It Up." He also made the statement that "The only reason why I think people bought Lick It Up more than Creatures of the Night was because we had no make-up on. That was the only reason."