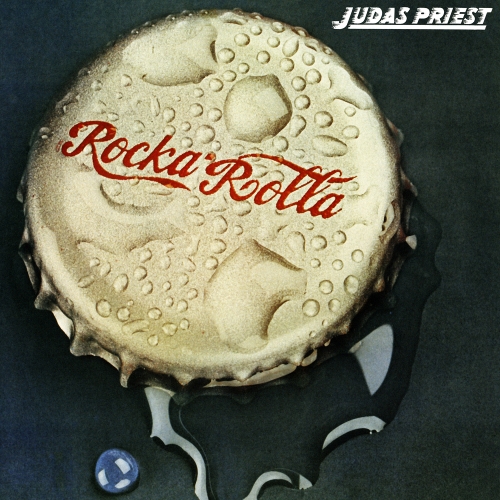 Going back to 1974 when Rocka Rolla was released, it was very different from other music being released. Rocka Rolla was also very different than any other Judas Priest release after 1974, even Sad Wings of Destiny was heavier than Rocka Rolla. In 1974 there were releases from Queen, Genesis, Supertramp, King Crimson, and Deep Purple........nothing like the Judas Priest debut. Rocka Rolla didn't do very well commercially because of how different the music was for its time. Rocka Rolla held on to the bluesy psychedelics of the 1960's and they did this style of music quite well and they did it with some added heaviness that hints at the Judas Priest of the future. In 1974, heavy metal was still in its infancy and the time period was still dominated by hard rock, so the added heaviness you hear in Rocka Rolla was experimental....which kept the album from being a commercial success. Classic and hard rock fans of today definitely have a great appreciation for this album. I consider Rocka Rolla an essential album to my heavy metal collection.

If you are fairly new to heavy metal and began listening to Judas Priest with, say.....Stained Class, then go back in their discography and listen to Rocka Rolla, you would not even realize you were hearing Judas Priest. However, if you give Rocka Rolla a couple listens you will hear an occasional dual guitar (a bench mark of Judas Priest), soaring vocals, and a heaviness that does speak of a future heavy metal band that becomes a historical entity. An added bonus to this album is the excellent production.

Outstaqnding tracks: Rocka Rolla, Never Satisfied, and the proggy Run of the Mill

Another really good reason why this album didn't sell well is because at the time, they were almost completely unknown. They didn't start to get recognized until Sad Wings, and even then, they were still pretty unknown. If we look back at other bands, other than Boston or Van Halen, who has really made a huge splash on their first album?

Anyway, I really like how this album is different than the ones that followed it, it showed that they were still finding their direction. I have this on CD only, no vinyl, but my CD has the first version of Diamonds and Rust, which I think is the best version they ever did, it's too bad that song never made it on the original album release.

Yeppers, most heavy metal bands were unknown to the USA market back in 1974. If I am not mistaken, the USA market was promoting Punk rock or hard rock at the time these budding metal bands were emerging. Radio stations didn't want any part of metal music until they seen how big the underground fan base was and how much $$ could be made......

I honestly cant think of any album that made a bigger splash than Boston's debut.

Magic said:
I honestly cant think of any album that made a bigger splash than Boston's debut.
Click to expand...
The only two that even come close (from my recollection) would be VH's debut, as you mentioned, however, Appetite For Destruction may very well be the biggest debut of the past 45 years (even surpassing Boston's debut in sales). Granted, they had the advantage of the MTV era that Boston and Van Halen 1 did not have, but they still did it.

As for Rocka Rolla, it took me a long time to garner a proper appreciation for the album. I've listened to it a lot in the past few years and I really like the different sound and style that they had on this album. You can definitely hear and feel the 60's and early 70's psychedelic/prog that is littered throughout the album. In retrospect, you can definitely see how they went from this sound to their other albums in the 70's. However, at the time, I can understand why it didn't sell so well. I can't think of any other album that I've listened to from that era that sounds like that.

Good review. Thanks for sharing.

Lynch said:
The only two that even come close (from my recollection) would be VH's debut, as you mentioned, however, Appetite For Destruction may very well be the biggest debut of the past 45 years (even surpassing Boston's debut in sales). Granted, they had the advantage of the MTV era that Boston and Van Halen 1 did not have, but they still did it.
Click to expand...
in 2013 Rolling Stone put out a list of the top 100 Debut LP's of all time. They put Van Halen at #27, Boston at # 41, Appetite as #4....and Beastie Boys "licensed to ill" as #1. (honestly, I don't think I have EVER heard that album...lol)


If you would take a FAN vote on best debut albums, and allow fans of all music genres vote, I bet the out come would look way different than what we would expect. Some debut album by Jay-Z would probably take #1....

and another really good debut album (that I wasn't even thinking about) that has some historic value.....Prounounced by Skynyrd would rank in my top 5.

I wasn't even born when this album came out. I didn't hear this album until after I heard Painkiller and took an appreciation for JP and collected the whole catalog when I was in my late 20's. I had a hard time getting into this album for obvious reasons. It just wasn't the JP I was use to.

Magic said:
and another really good debut album (that I wasn't even thinking about) that has some historic value.....Prounounced by Skynyrd would rank in my top 5.
Click to expand...
completely agree, LS debut definitely deserves mention in this conversation (regarding great debut albums)
You must log in or register to reply here.
Share: Facebook Twitter Google+ Reddit Pinterest Tumblr WhatsApp Email Link