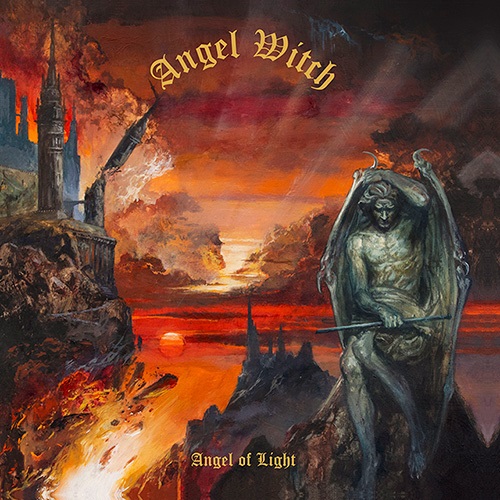 This album is Angel Witch's 5th album in their 43 year career. The band has been plagued over the years with numerous band member changes, which isn't uncommon for any heavy metal band. Each album in their discography reflects the member changes, except "Angel of Light". The reason I say this is because upon hearing "Don't Turn Your Back", I thought I was hearing the SAME musical output from the debut album of 1980. It is refreshing to hear the super polished production of the 80's. My nostalgia meter was running high!

The album is chocked full of meaty guitar riffs and solos that are delivered to the listener at a fast & furious pace. Kevin, who by the way is the only original band member, gives a solid vocal delivery. He is one of those vocalists you either hate or you love. I would say his voice and vocal style is tolerable, and does become sorta "screechy" sounding at times.

My main complaint is how long and bloated some of the songs are. I do tend to lose some interest once the songs clock in past the 4 minute mark. A good example of this overloaded bloat would be "The Night is Calling" which runs a little over 7 minutes, however, the song is one of the better songs on the album with an excellent guitar piece mid song. My picks off the album would be the triple doomy treat of "The Night is Calling", "Condemned", and "Window of Despair".

My overall first impression: The album is good (3/5). I found the album to have too much showboat bloat. The songs could have been cut down to 4 minutes and still rocked just as hard. However, my nostalgia for the 80's NWOBHM styles kicked in and I am forced to give the album a bit more love.....3.5/5

The songs did seem to drag a little bit I have to agree but it doesn't bug me too much when the riffs themselves are decent. It does enough to stop it being a perfect album or even a 4/5 for me so your rating is the perfect one. I will at least give them some credit for keeping it to 8 songs considering their lengths instead of really overbloating it with 10-12.
You must log in or register to reply here.
Share: Facebook Twitter Google+ Reddit Pinterest Tumblr WhatsApp Email Link