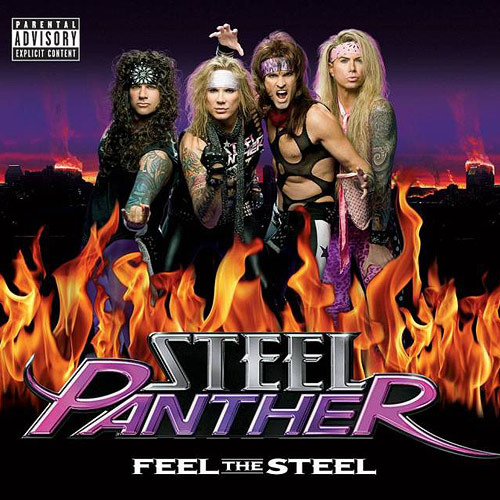 
Steel Panther isn’t a new band, they have been around since 2000. "Feel the Steel" is the second studio release from the band and the first release on a major label. The band isn’t your typical 80’s hair metal band, but a parody of all things that glam from the 80’s and 90’s. They have a fantastic image, from the skin tight spandex pants, hairsprayed big hair, to the make-up and stage antics that made the glam bands so fun.

Steel Panther takes a huge comical stab at the glam and hair metal of the 80’s/90’s with borrowed riffs, over exaggerated personas, and blatantly in-your-face raunchy cliché lyrics. Is this band silly? Of course, but also brilliant at the same time. The music has some catchy riffs and Satchel delivers his fair share of original chops and his solos are superb, which makes the songs worth listening to. Satchel’s acoustic work on the ballads are completely original and expertly performed. The vocals of Starr are very powerful and soar in the ballads on "Feel the Steel", his vocal ability is what makes this band shine. Starr can hit the highs and the lows, dish out the grit and the gravel, and yet be as smooth as glass. The music is the strong point of the album, the music is full of energy and fun to listen to.

The biggest flaw in the album are the lyrics. Although, meant to be a parody of all the cliché lyrics of glam metal, the lyrics on "Feel the Steel" are downright raunchy, brash, and foul . The lyrics take the hilarity of the cliché too far, IMO. The lyrics are extremely juvenile with some pretty intense shock value. Some would call this brilliant, I just call it mildly funny with a touch of brilliance that completely lacks class. Is it a move of genius? It just could be. Parody in music is nothing new, glam metal is nothing new, foul lyrics are nothing new, but when you couple them together, and package them as Steel Panther then it comes across shockingly brilliant. If a listener can get past the shock value of the lyrics, then the humor does shine through. Oh! And don’t forget, the music is fantastic.

Eh, their OK for about 1 1/2 songs then the novelty wears off. Death to all but metal would have much more amusing if they weee talking about butt metal.

I think the lyrics add to the facetious charm of the band. Musically they are great also. In a world full of PC there needs to be boundary pushing bands like this. I guess to be fair that would also have been done by many Black and Death Metal bands too. Lol A fair review even though I disagree with the criticism of the lyrics. I respect your view though as they're definitely a band that isn't everyone's cup of tea.
You must log in or register to reply here.
Share: Facebook Twitter Google+ Reddit Pinterest Tumblr WhatsApp Email Link