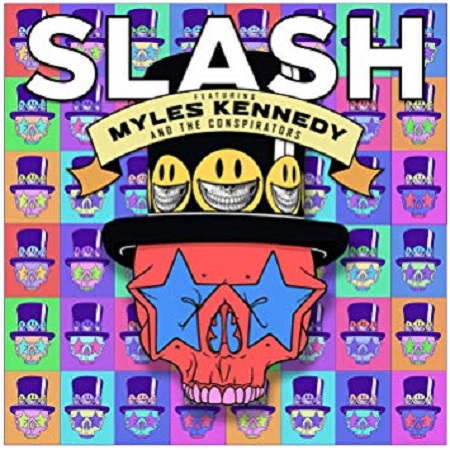 Living the Dream is surprising good when you take into consideration that the album was made in between Slash's shows with the Guns N Roses tour this past year or so and Myles Kennedy's work on his new solo album, Year of the Tiger. Both musicians have been exhaustively busy the past couple years and this album definitely competes with their recent outputs....like Myles' new solo album and Guns N Roses Appetite for Destruction: Locked and Loaded box set, which have both been released in 2018. Myles has also been working on a new Alter Bridge album, which is suppose to be released in 2019. They say if you want to get something done and done right "give the job to the busiest person" and this saying holds true for Living the Dream.

Living the Dream is the third Slash album to feature Myles Kennedy as vocalist and over four years since their last album together. Slash has done a marvelous job writing new riffs for this album, his character really shines through on this album. Slash, Myles, and the Conspirators have such an outstanding chemistry together and it has only gotten better on Living the Dream.

The album opens with "The Call of the Wild", which is a modern day hard rock heavy hitter, and you don't have to wait long for Slash to turn loose his axe.....in only the way that Slash can deliver a riff and hook. Next up is a groovy (thanks to the beats by drummer Brent Fitz) , but menacing tune, "Serve You Right", which has some really great vocals by Myles but I could have done without all the Oh's and Ah's in place of words....but this song is one of my picks for the ZZ Top-ish groove.

From here you get a mixed bag full of hard rock and mediocre AOR songs. "My Antidote" is, IMO, another modern, everyday rock song. "Mind Your Manners" is a high energy song, but nothing I would call out of the ordinary, just a good foot tappin' song. "Lost Inside the Girl" is a deeper, somewhat darker, mellow tune, very reminiscent of a 70's AOR ballad except it has a mid song solo that just didn't seem to fit the song. "Read Between the Lines" has soaring vocals and a nice mellow groove which changes very quickly to a hard flying melody. Next up is "Slow Grind" which is a cool boogie tune. Whoa! The hard rock comes to an end with the slow, sensitive, and moving "The One You Loved Is Gone", quite a beautiful ballad. Picking up the pace again is "Driving Rain" with it's southern influenced boogie, which is the most accessible song on the album and explains why it was the first single released off this album.

Living the Dream rounds up the album with three songs that are my picks off the album. "Sugar Cane" is ear candy. It is what I want to hear from Slash & The Conspirators, a revved up piece of old school hard rock. This song alone makes the whole album worth your time to give it a listen. Then to follow that up with "The Great Pretender" is just brilliant, with it's jaw dropping solos and melody. "Boulevard of Broken Dreams" has it all.....good lyrics, smooth vocals, hooks, riffs, melody and a poignant message.


The Call of the Wild