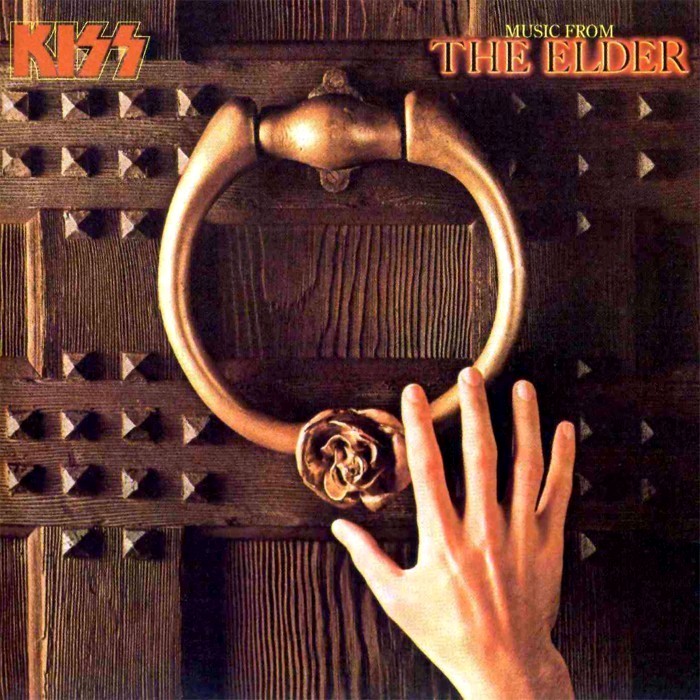 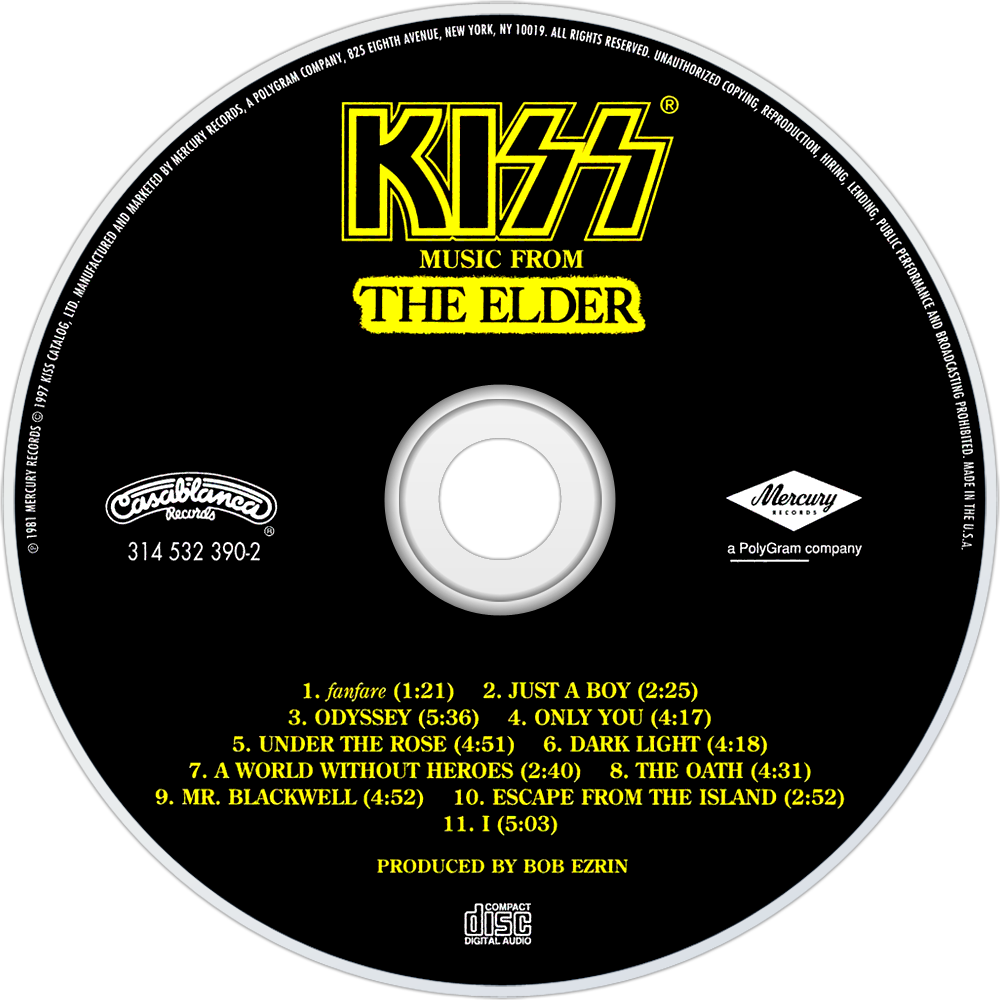 Overview:
Music from "The Elder" is the ninth studio album released by the American rock band Kiss. Album sales were so poor that Kiss did not embark on a supporting tour for the first time in its eight-year history, opting instead to make a handful of promotional appearances. Music from "The Elder" was the last Kiss album on which Ace Frehley appeared until the 1996 Reunion Tour. Frehley, disgruntled with the band's creative direction and production of Bob Ezrin, stopped actively participating in the Kiss operation by early 1982, and officially quit the group by November that year.
While "A World Without Heroes" was later performed on the band's 1995 MTV Unplugged appearance, the entire album has been largely ignored in live performances. During a 2004 Australia show, the band attempted to perform "I", but Gene Simmons had long forgotten the lyrics. Short performances of "I ", "Mr. Blackwell", and "Just a Boy", were played on the 2011 Kiss Kruise.
Kiss was in the midst of a transitional phase as the 1980s began. Drummer Peter Criss, who was not involved in the recording of 1980's Unmasked, officially left Kiss in May 1980. His replacement Eric Carr was officially introduced in July. The group had recently embarked on a hugely successful tour of Australia and New Zealand (where the group's popularity was at its peak) in November, but the band's commercial fortunes at home were drastically reduced from the 1975-79 era. Due to the lackluster sales of Unmasked, Kiss toured exclusively outside the United States for the first time in their career, except for one concert at the Palladium Theatre in New York. The overseas tours were well-attended, partly because Kiss had rarely ventured abroad and because the more pop-oriented Dynasty and Unmasked albums did better in the European markets than their earlier hard rock albums.
This commercial downturn is attributable to many factors, two of the biggest being the softening of Kiss's image in an effort to appeal to a broader fan base, and the softening of their music. Unmasked was a decidedly more pop-oriented effort than earlier albums, and represented a sales drop-off of 65% from 1979's Dynasty. It also became the first Kiss album to fail to achieve platinum status since 1975's Dressed to Kill. The glut of Kiss merchandising that had cropped up in the late 1970s led to a backlash from fans, who felt that Kiss was then more concerned with making money than with making good music.
In an effort to return to their hard rock roots, Kiss began recording music more akin to the hard rock style that launched them to popularity in the mid-1970s. The fall 1980 issue of the Kiss Army Newsletter hinted at the style the new album was to take — "It will be hard and heavy from start to finish—straight-on rock and roll that will knock your socks off." But at the same time, Simmons, Paul Stanley and creative manager Bill Aucoin felt that just returning to a harder sound was not enough. They believed that only a bold artistic statement would regenerate public interest in Kiss. To that end, they enlisted producer Bob Ezrin to work with the group, who in turn daringly employed members from the American Symphony Orchestra and St. Robert's Choir to record tracks for the album. Ezrin had worked with the group before, producing the group's hit 1976 album Destroyer. He had also co-produced Pink Floyd's landmark 1979 concept album The Wall. Simmons, Stanley and Aucoin felt that Ezrin could help bring their ambitions to fruition.
The original vinyl release was a gatefold sleeve. For the first time, a Kiss album featured no image of the group, let alone the customary front-cover appearance. According to one story, the hand reaching for the door-knocker is not that of Stanley: Aucoin has stated that it belongs to a hand-model, hired for the shoot. However, in 2011 a photo surfaced from the album cover shoot showing a partially naked-faced Stanley with his hand on the door knocker. The door itself belongs to the Park Ave United Methodist church on Park Avenue, New York City. The photo session displayed a change of image: the costumes were more streamlined, especially when compared with the costumes for Unmasked, as were the hairstyles of Stanley and Simmons in particular.
Recording sessions for the album commenced in March 1981. Sessions were held in Toronto, New York City, and Frehley's home recording studio in Wilton, Connecticut. During the recording, Ezrin and Kiss worked in complete secrecy. Ezrin in particular had insisted that he would only communicate with Kiss or Aucoin. No one other than Ezrin and Kiss ever heard the album in progress. Frehley became increasingly frustrated during the sessions, as he disagreed with the band's decision to abandon their original plan to record a straight rock album. Additionally, a number of guitar solos Frehley recorded were not included in the final cut. But as had happened frequently after Criss's departure one year earlier, Frehley was often outvoted 2-1 on band decisions. Carr was not a partner in Kiss as the other three members were, but rather an employee. Frehley also resented what he felt was Simmons and Stanley's domination of the recording sessions.

This is really a good album, although it's odd as a "KISS album". It was originally written and recorded with the idea that it would be the soundtrack to a movie, "The Elder" (thus the name). That never panned out as this album was critically wrecked by nearly everyone at the time it was released. Two albums prior, Dynasty had the disco-equeue hit I Was Made For Loving You, which did very well in Europe and Australia, and did chart very well in the US, but the overal feel of that album was the start of what could have been the end of the band. The next album Unmasked was also panned by critics and deservedly so. So, when The Elder came out, at lot of people, including long time and die-hard fans started writing off the band completely.

In retrospect, the band got what they deserved for changing their formula so much over the span of 3 albums in 3 short years. I don't think I even heard anything off of this album until proabably 1983 when I got it for Christmas (if memory serves me correcty). I liked it right out of the shoot. The first side had various changes in tempo and feel, but is 100% solid. Side two wasn't much different in that there was some goofy, non-KISS sounding songs like Mr Blackwell, Odyssey and A World Without Heroes.

It's hard to put my thoughts on this album in just a simple paragraph or two, because the album, while not technically 'complex', was really complex in terms of what KISS had done prior to 1981. I love it. The album has a medieval feel to it. A sense of dungeons and dragons mixed with Camelot. The story is about a boy who was chosen by destiny to be the hero that was needed, and it takes you through his growth in becoming a man, that much needed hero.


Anyway, I can't give this a truly proper rating on a 1-5 scale, so the best that I can do is give it a 4. As much as I love it, I can't rate it higher than some of the classic albums from the 70's or the next couple of albums that came after it (specifically Creatures of the Night as well as Lick It Up).

This album put them back in the hands of Bob Ezrin (fresh off the boards with Pink Floyd's The Wall) of "Destroyer" fame.

This release takes an ass beating that it doesn't deserve. A band should be allowed to explore new sounds and create music they feel is important to them, in that vein this band was in chaos. Ace recorded his parts in his home studio, mailing it in and he does a very respectful job with the tracks he wrote. Gene wanted to be a movie star and was doing whatever he wanted and Paul was helpless to it all. Peter was gone from the roost.

All that said, I LOVED it then and still listen to tracks off it today. "Under The Rose" being my favorite.

DrMaddVibe said:
This release takes an ass beating that it doesn't deserve.
Click to expand...
^ This right here.

I do think that it's cool that the album has kind of taken on a 'cult status' with some fans over the last 20+ years and from what I hear, they even play some of the songs off of it at Kiss Expos and on the Kiss Kruise.
Music information in first post provided by The AudioDB
You must log in or register to reply here.
Share: Facebook Twitter Google+ Reddit Pinterest Tumblr WhatsApp Email Link