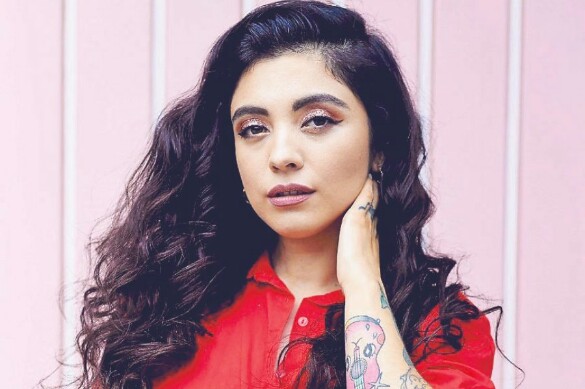 Albums:
Norma Monserrat Bustamante Laferte, aka Mon Laferte, is a Chilean singer who is currently the most listened to Chilean artist on Spotify. She started out as a pop singer under the name Monserrat Bustamante and only released one album under that name, La Chica de Rojo. After being diagnosed with thyroid cancer in 2009, she decided to change her name to Mon Laferte, and in 2011, she released Desechable, which had a lot more of a poppy alternative rock feel. Over the course of her career, she has slowly transitioned from her aforementioned alternative pop rock sound to more traditional sounding Latin music.

I mentioned how I got into Mon Laferte in the "currently listening to" thread in this section, but I'll briefly repeat the story. An article about her randomly popped up in my suggested articles feed in Google Chrome recently. It was about how she went topless at the 2019 Latin Grammys in protest against the Chilean government/police. The article said that her album Norma won in the Best Alternative Album category. As soon as I saw the word "alternative," I went straight to YouTube to check her out, with zero expectations. The first song/video I clicked on was Caderas Blancas (or White Hips for those of us who can't speak a lick of Spanish, i.e. yours truly). I was immediately entranced by her beauty and her soft, sweet sounding voice. Despite me not really being into this style of music, I wanted to hear more, so I watched the video for Funeral next. I loved the sound of the acoustic guitar with the horns peppered in throughout, and from that point on, I was hooked.

Having now gone through her entire discography, I can say that while I like most of it, my two current favorite albums of hers are her latest two - Norma and La Trenza. Norma is a concept album about a couple going through the different stages of a relationship, and it by and large sounds like what I think of when I picture traditional Latin music, but with a modern spin on it. La Trenza is more guitar-based than Norma and has a bit more of a modern alternative pop rock sound to it, but with plenty of Latin flavor mixed in. Amárrame (Tie Me Up), one of the singles from that album, is one of my favorite songs of hers. It's got a simple, groovy guitar hook that I just love. I don't have to understand the lyrics to know what she and the other singer/guitarist, Juanes, are getting at. The title and the sounds of their voices are more than enough to get it...ha ha.

Generally, the further back you go through her discography, the less I like that particular album, but I do pretty much like them all. They all definitely have their good songs and/or good moments, and none of them are badly performed/played. The only album of hers that I actually dislike is her very first one, which she doesn't even mention in a random introductory video of hers that I saw on YouTube. It apparently sold very well, but it's just too poppy for me and sounds like it could have been the soundtrack to a soap opera. It's not bad per se, it's just not my style at all.

After listening to Mon Laferte exclusively for nearly two weeks, I've been slowly allowing other artists/bands to creep back into my listening sessions, but I still can't get enough of this lovely young lady and her music. There's just so much variety here, both between and within each album she's made. Every time I listen to one of her songs, I hear something new that I didn't notice before. If you are even remotely interested in this style of music (or even if you're not), check her out. You might be pleasantly surprised, like I was.