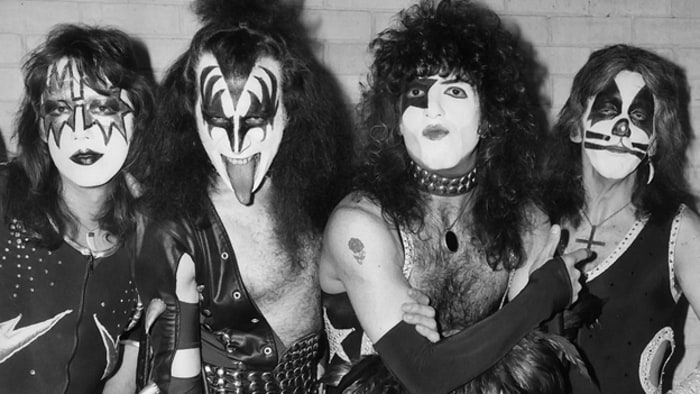 Albums: (The album title is a link to the album thread with album video)

Kiss (often stylized as KISS) is an American rock band formed in New York City in January 1973. Well known for its members' white and black face paint and flamboyant stage outfits, the group rose to prominence in the mid to late 1970s on the basis of their elaborate live performances, which featured fire breathing, blood spitting, smoking guitars, shooting rockets, levitating drum kits and pyrotechnics. Counting the 1978 solo albums, Kiss has been awarded 28 gold albums to date, the most of any American rock band. The band has sold more than 40 million albums in the United States, of which 20 million have been certified by the RIAA and their worldwide sales exceeds 100 million albums. The 1973 original lineup of Paul Stanley (vocals and rhythm guitar), Gene Simmons (vocals and bass guitar), Ace Frehley (lead guitar) and Peter Criss (drums) is the most successful.
With their makeup and costumes, they took on the personas of comic book-style characters: Starchild (Stanley), The Demon (Simmons), Spaceman or Space Ace (Frehley) and Catman (Criss). The band explains that the fans were the ones who ultimately chose their makeup designs. Stanley became the "Starchild" because of his tendency to be referred to as the "starry-eyed lover" and "hopeless romantic". The "Demon" makeup reflected Simmons' cynicism and dark sense of humor, as well as his affection for comic books. Frehley's "Spaceman" makeup was a reflection of his fondness for science fiction and supposedly being from another planet. Criss' "Catman" makeup was in accordance with the belief that he had nine lives because of his rough childhood in Brooklyn. Because of creative differences, both Criss and Frehley were out of the group by 1982. The band's commercial fortunes had waned considerably by that point.
Buoyed by a wave of Kiss nostalgia in the 1990s, the band announced a reunion of the original lineup in 1996. The resulting Kiss Alive/Worldwide/Reunion Tour was the top-grossing act of 1996 and 1997. Criss and Frehley have since left Kiss again, but the band continues with Eric Singer and Tommy Thayer. Stanley and Simmons have remained the only two constant members. Kiss has been named in many "Top" lists. They include Number 10 on VH1's '100 Greatest Artists of Hard Rock', 9th on 'The Greatest Metal Bands' list by MTV, number one on Hit Paraders's "Top 100 Live Bands", 56th on VH1's "100 Greatest Artists Of All Time", and 26th on Gibson's "50 Greatest American Rock Bands". Kiss was nominated for the Rock and Roll Hall of Fame, ten years after becoming eligible. However, on December 15, 2009, it was announced that Kiss did not make it in.
Last edited: Apr 15, 2018

My favorite deep cut of theirs! EVERYONE gets a solo and the harmonies!


My go to song for why they need to scrap the make-up...get Bruce back and make music like this!!! The double kick drumming, the deep bass and the blistering solo at the 2:34 mark that is cooking all the way from the 2:01 mark! Bruce is on fire! Paul and Gene are holding the background on this letting Eric and Bruce shine...a very rare event for any KISS song.

PROOF that Gene is a serious bassist. Give it a listen. Plus the Demon is out of its cage! Ace walks side by side with him too!

Yes. The "Disco" KISS. Yet I can defend it with Gene's blistering 16th fingering beatdown. He might've had a loop in the studio...but he had to play it live. Then there's Ace's solo. Paul's vocals and Peter's running drum beat. This was more than a "Disco"song. This really is 4 musicians throwing down the gauntlet in the face of their industry and getting airplay for it! Did they sell out? No. Look what they did afterwards. Yeah...that Ace solo. Gene's playing is a true thumb in the eye for people that think he's just a gimmick bassist. Don't believe me? Try playing that. It will wear you out.

Former KISS guitarist Ace Frehley has released a new single entitled “Bronx Boy” from his upcoming new studio album, which is now expected to be released this summer.

This is such a fun album to listen to! It's one of the albums that define the '70's for me. The music, subject matter, cover art, it is a perfect '70's hard rock album. Play "Take Me", "Baby Driver", "See You In Your Dreams", "Makin' Love" and it takes me back to a time when I wished I was 10-years older than I was!

"Baby Driver" is such a great guitar song, I just love it. Nothing technically challenging but it's still that in-your-face Ace style, using the sustain that the Les Paul is known for to great effect.

If you ask me, this is a perfect KISS album, with Ace's style and tone demanding attention, the drum sound was finally nailed, and some of the best writing and performances by Paul and Gene. Rock-And-Roll-Over rocks, and is a fun ride from beginning to end.

Paul starting...Peter crashing in...Ace storms over top and Gene blasts the bottom out...KILLER into...the solo...yeah...they were on fire for this album. NO FILLER on this one.

can't forget these too... 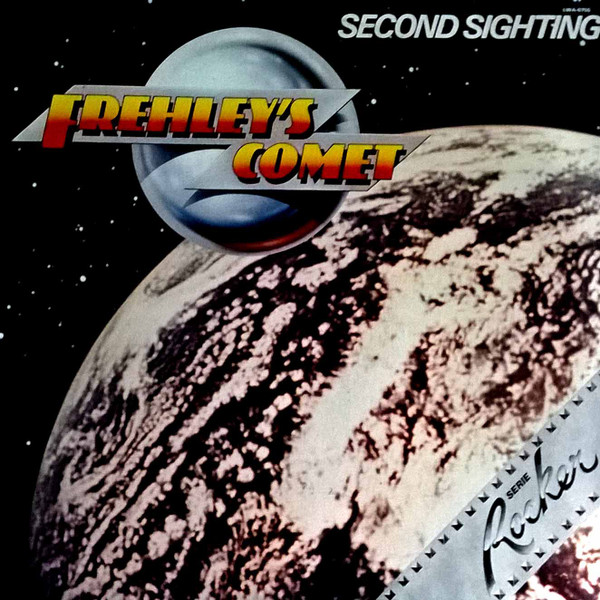 Second Sighting wasn't a bad album, but it certainly didn't measure up to the first Frehley's Comet album. I don't spin it very often, but still do occassionally. The third album, Trouble Walking was fantastic and along with the debut album are easily my two favorites by Ace in the post-KISS era.

Speaking of Second Sighting... I was listening to it this past weekend. I think my favorite song on the album is the last track, The Acorn is Spinning


A humorous little story in this song. Have to listen to the speaking parts.

DrMaddVibe said:
Listen to the lines that were lifted to make Calling Dr. Love!!!
Click to expand...
Check the quick riff at the 00:56 or 00:57 mark of that Bullfrog Bheer video and tell me that isn't 100% identical to the intro to Take Me, from Rock and Roll over. You hear it again at 2:17. Interesting note, the songwriting credits for Take Me is only Paul Stanley and Sean Delany.

I'm about to be excommunicated for this, but I never saw the draw to KISS. I like Ace Frehley a lot, same with Paul, I think that's where most of the talent comes from, but I never could take KISS seriously...

Although they're some of the best out there when it comes to setting up fun live performances...
Last edited: Jul 3, 2018 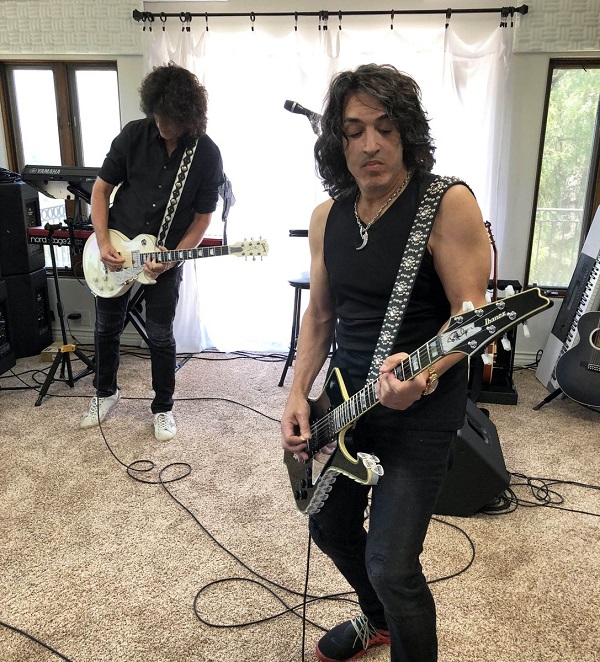 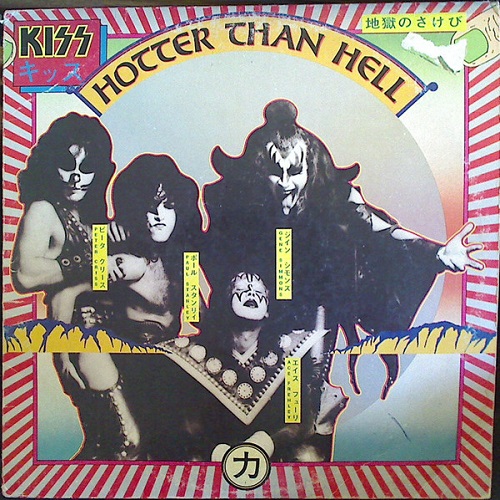 Personal favorites from this album, but I do like almost every song on here.