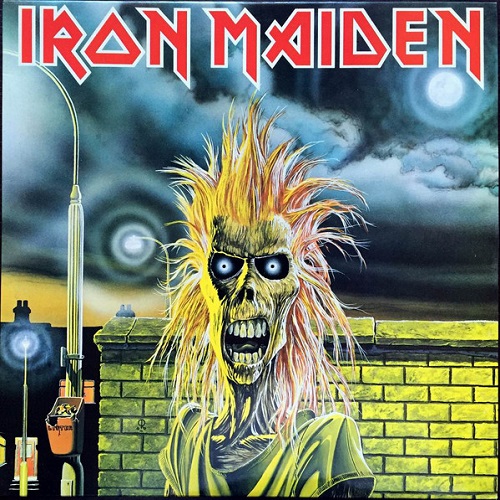 In 1980 there were already established heavy metal bands like Judas Priest, Black Sabbath, and Budgie (all from the UK) and these were the bands that brought the world the New Wave of British Heavy Metal (NWOBHM). When Iron Maiden released their self titled debut album, we also saw releases from Black Sabbath, Judas Priest, Diamond Head, Motorhead, Ozzy Osbourne, Budgie, Saxon, Samson (Bruce Dickinson pre Iron Maiden), and a plethora of other heavy metal bands as the NWOBHM gained popularity world wide. People all over the world were banging their heads to heavy metal!!!! It was a fantastic time for heavy music....one of my all time favorite era's of music, the 80's.

Iron Maiden became the band that introduced us to "Eddie" , the paramount of mascots. Eddie has been one of the best known mascots in music history. He attends every Iron Maiden concert and he is on all their album covers...........and he has even become an action figure for the kiddies to play with. Eddie has made it to the record charts with each and every single. Eddie is the man!!

Iron Maiden hit the metal trail blazing with Paul Di'Anno as the gruff vocalist with a hard attitude and those dueling guitarists, Murray & Stratton, who rivaled the speed and technique of any others in the NWOBHM. It took Iron Maiden several years of performing in pubs and small venues before this album was released and that time was well spent perfecting the sound that would arise as a band who is top of their game. The album opens with "Prowler" which is a powerful song with massive amounts of energy that carries on throughout the whole album. "Remember Tomorrow" highlights Steve Harris' bass talents and is my favorite track on the album; the atmosphere of this song is so emotional. "Phantom of the Opera" is by far the most significant achievement of the whole album. "Strange World" is another one of my favorites off this album. I adore the somber ambience of this song. "Iron Maiden" is not on of my favorites but the song has been played as an anthem at over 2,200 live concerts (source)

another band which I have collected the entire catalog over the years. I love the debut album although it is not my favorite, that would have to be Powerslave.

The heavy hitter off this album is Prowler but I think I am with miss Magic on how epic Remember Tomorrow is.