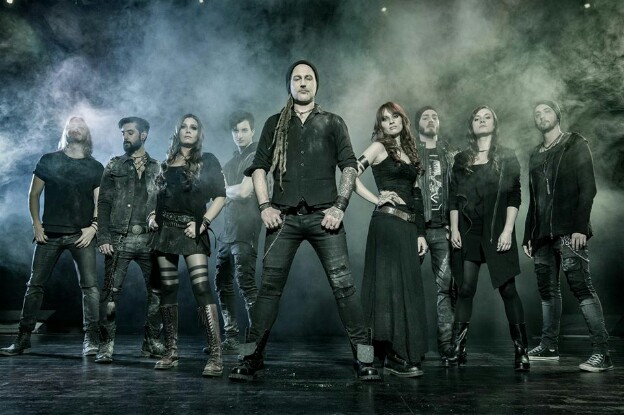 Current members:
Notable former members:
Albums:
Eluveitie are a nine-piece folk metal/melodic death metal band from Switzerland. Unlike Primordial, who are purely guitar based, they incorporate a ton of traditional folk instruments into their music, like flutes, bagpipes, a hurdy-gurdy, and more. They combine this with tasty Gothenburg-style riffs to create an awesome, unique sound that was unlike anything I had ever heard before I started listening to them. Chrigel handles most of the vocal work with raspy death growls, and Fabienne does the clean singing. (Anna Murphy did the cleans until Evocation II, when she, Ivo, and Merlin left Eluveitie and formed Cellar Darling.)

I've listened to all but their very first album, and every single one of them is very, very good. Like most bands, I feel that they've gotten better and better with time. I bought Everything Remains (As It Never Was) first, and I liked some of it, but their sound was just so different that it took me a while to get into. I was still fairly new to metal at the time and had a difficult time understanding what they were trying to do. Then I bought and listened to Helvetios after it came out, and all of a sudden, everything just clicked for me. I've loved them ever since.

Note: Evocation and Evocation II are both pure folk albums. I haven't listened to Evocation for a while, and it was all right, but Evocation II is friggin' great.

I could easily fill up this thread with videos, but I'll try to restrain myself. I absolutely love this band.

Everything Remains As It Never Was (title track from that album)

A Song for Epona (from Helvetios)

The Call of the Mountains (from Origins)

One more - a taste of yet to be announced things to come, apparently.

Eluveitie is apparently dropping a new album, Ategnatos, on April 5th, and I'm already looking forward to it! Here's the title track, which is pretty darn good.

Here's another single from Ategnatos, Ambiramus. I'm really liking what I'm hearing so far - and Fabienne is so adorable!

I finally had a chance to sit down and listen to Ategnatos in its entirety the other day, and yeah, it's excellent, as I expected. There are so many good songs to choose from, but this one is my favorite right now. I love it, and I love this band!

I have not listened to this album yet. I have seen this album on a few "best of 2019 so far" lists, so I will definitely be giving it a listen. I'm still catching up on what has been happening the past couple months.....