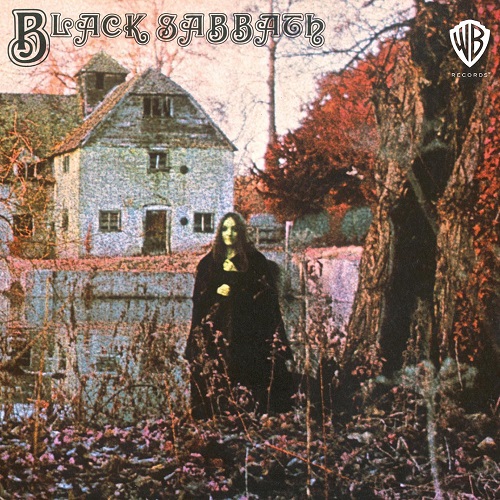 
In 1970 I was 10 years old and not even close to being ready to hear the darkness of Black Sabbath, however, my older brothers did listen to Black Sabbath. I can remember my mother telling them to turn that "Devil Shit" off....

Which is exactly how critics responded to the Black Sabbath debut album; Rolling Stone, 1970 stated " unskilled laborers like Black Sabbath, which was hyped as a rockin’ ritual celebration of the Satanic mass or some such claptrap, something like England’s answer to Coven. Well, they’re not that bad, but that’s about all the credit you can give them. The whole album is a shuck" (source)

Despite the negative criticism, the album soared to the top of the UK charts and hit #23 on the US charts............The critics may not have liked the album, but it was the dark, heavy, and evil difference the fans were looking for. The songs were derived from uncensored evil lyrics and deep, doomy guitar tones.

From the first clap of loud thunder and the creepy church bells in "Black Sabbath" to Ozzy screaming "Oh No!Please God Help Me" in response to being persued by Lucifer.... the opening of the album lets the listener know what they are hearing is nothing like anything they have experienced before this album. The Black Sabbath song would go on through history as the first doom metal song.

"N.I.B." is a story about Lucifer falling in love with a human and his charming & poetic advances towards her. However, the song title has nothing to do with the actual song, Nib is the nick name Ozzy used for Bill Ward's beard. The riff to the song does appear to be a re-incarnation of a famous Cream song which is where some critics called Black Sabbath a Cream band, but worse. In reality the first 4 notes of the riff are identical but the next 6 notes are different, which makes the riff sound not only creepier but way more cool than that Cream song.

"Sleeping Village" is a song with a short lyrical beginning then progresses into a big jam session that goes into the 10 plus minute "Warning" which is also another huge jam session. Honestly, they could have ended the album at N.I.B. and I would be totally satisfied, but hey.....it was 1970, and everyone was jamming huge solos!!

If you look at the at the track list, I know you will be confused. A couple tracks that are listed as songs are actually intro's to the song that follows or maybe they are just some jams that Iommi busted out and decided to call them songs. I have no clue why they did this for the North American release. Maybe it was to create interest or just seem like they gave the US more than they did the UK.


My overall rating: 3.5/5. The album is a classic and of historical significance, but this is not one of Black Sabbath's best albums.
Last edited: Jun 17, 2019

Nice review Miss Magic, I understand exactly what you're talking about with this album and it's self indulgence on the part of Iommi. It's amazing how much the second album "Paranoid" differs from the first. Gone are the long "self indulgent" solos, with the exception of "Rat Salad" and Bill Ward's drum solo. I probably would've given the album a higher score simply because of the historical importance of this first Sabbath album, I mean, they invented heavy/doom metal.

BTW,....my favorite song off this album is "Wasp/Behind the Wall of Sleep", the inspiration for the main part of this song comes from a story written by H.P. Lovecraft, one of my favorite authors.
Last edited: Jun 19, 2019

It's interesting to note that the UK version of this album differs slightly from the North American version. The UK version was released on Vertigo records, and contained the song Evil Woman (cover of a song by the band Crow). Missing from the UK version is "Wicked World".

The Vertigo label is pretty trippy, it's a Twilight Zone type spiral that moves like a cone when the record is spinning. I've never heard the cover of Evil Woman by Sabbath, but I did know it was on the UK release.

This wasn't the first album I heard from BS. I think one of my friends got me into BS with Mob Rules. BS is another band that I have collected the entire catalog.

I agree with Speek King, you should have given the album a better score just on historical significance alone. But I understand where you are coming from with the album being filled with Iommi fluff and it not being their best work. However, Wasp/Behind the Wall of Sleep, Black Sabbath, and NIB are classics. You sure you don't want to rethink that 3.5 Miss Magic?.